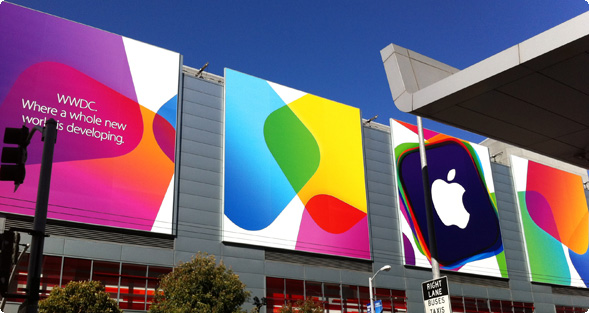 Since there is just little over a month left till this year’s Worldwide Developers Conference, I thought it would be a good idea to sit down and write a simple guide for people who are attending the conference for the first time.

You’ve wished to get there for years, you might have missed the ticket sales last year (or the years before that), but now you’ve won the ticket lottery (or student scholarship) and you just can’t wait for the whole experience. You feel like a kid before Christmas! Am I right? You also probably want to get the most out of it, and that’s where this blog post comes in.

I was lucky enough to attend the WWDC last year (more about that here), so I have some experience with it. I am aiming to include here all the tips and tricks I wish I’d known before my first “DubDub”, and I hope it will be helpful for you.

So, sit back, get a cup of coffee, make yourself comfortable and then get back over here. I’ll be waiting.

Posted on April 18, 2014 by Lukas under iOS development | No comments

If you are in the Twitter circles of young iOS developers, you’ve probably seen at least a few videos of scholarship apps created by students that are applying for this year’s WWDC scholarship. So I thought it would be a good idea to show off my app too. I’ve tried to make it short and sweet, instead of big app with a lot of effects and tons of texts, as I don’t expect Apple reviewers to spend too much time with each individual app. But when I saw some of the others, maybe I made it too simple. Anyways, here it is:

(I am sorry for the shaking, I should probably get a tripod for the next time :P)

As you can see, there is a simple intro implemented using UIKit Dynamics with different elasticity for each letter, and then a parallax timeline with my history. What you probably didn’t notice – there is also a little effect that distorts the texts during scrolling and make the texts sharp when it stops. That’s done using an attachment behaviour, changing the anchor point in viewDidScroll, and observing center point of the attached view, where I calculate distance between the centre point and the scrollView offset, and set the textView’s shadowOffset and shadowRadius based on the difference.

If you are interested in what others did, you can take a look at this GitHub page. And if you applied for the scholarship yourself, make sure to submit yours there.

All applicants will be notified of their status by April 28, that means 10 days from now. I was lucky enough to get in last year, so fingers crossed for all the hard-working newcomers!

My flight SFO ✈ JFK, and why I enjoyed it so much.

Posted on June 22, 2013 by Lukas under Conferences | No comments

Hi guys, just a quick update from my travel all the way back to Prague. I am currently sitting on the plane from JFK to Prague, and I couldn’t resist to write about my experience from the first part of the travel home (from San Francisco to New York). Because.. I got to talk with a really interesting girl from Ireland!

I know, the conference ended 5 days ago, I should’ve written about it way sooner. But there is so much to explore in SF! Anyway, better now than never, right? For those of you who hasn’t read any of my other posts here; I got lucky and won the WWDC Students Scholarship, so I had the opportunity to be at this year’s ‘DubDub’ (as cool guys call it). Here are some notes about what kind of experience it was for me.

My first day at WWDC, and why it changes everything.

Posted on June 11, 2013 by Lukas under Conferences | No comments

Today started this year’s WWDC, and since I won the scholarship, I had the incredible opportunity to be part of it. In this blog post, I’ll try to summarize the most important things from my personal perspective, and I’ll tell you guys why it is a big deal not only for Apple and for the whole world, but also for me personally.

My first day in San Francisco

For me, today was long, stressful, tiring, but also very exciting and upbeat day. I have traveled from Prague to San Francisco (over 13 hours spent in airplanes), and I have, for the first time in my life, seen San Francisco in all its glory with my own eyes. And boy, it really is Something.