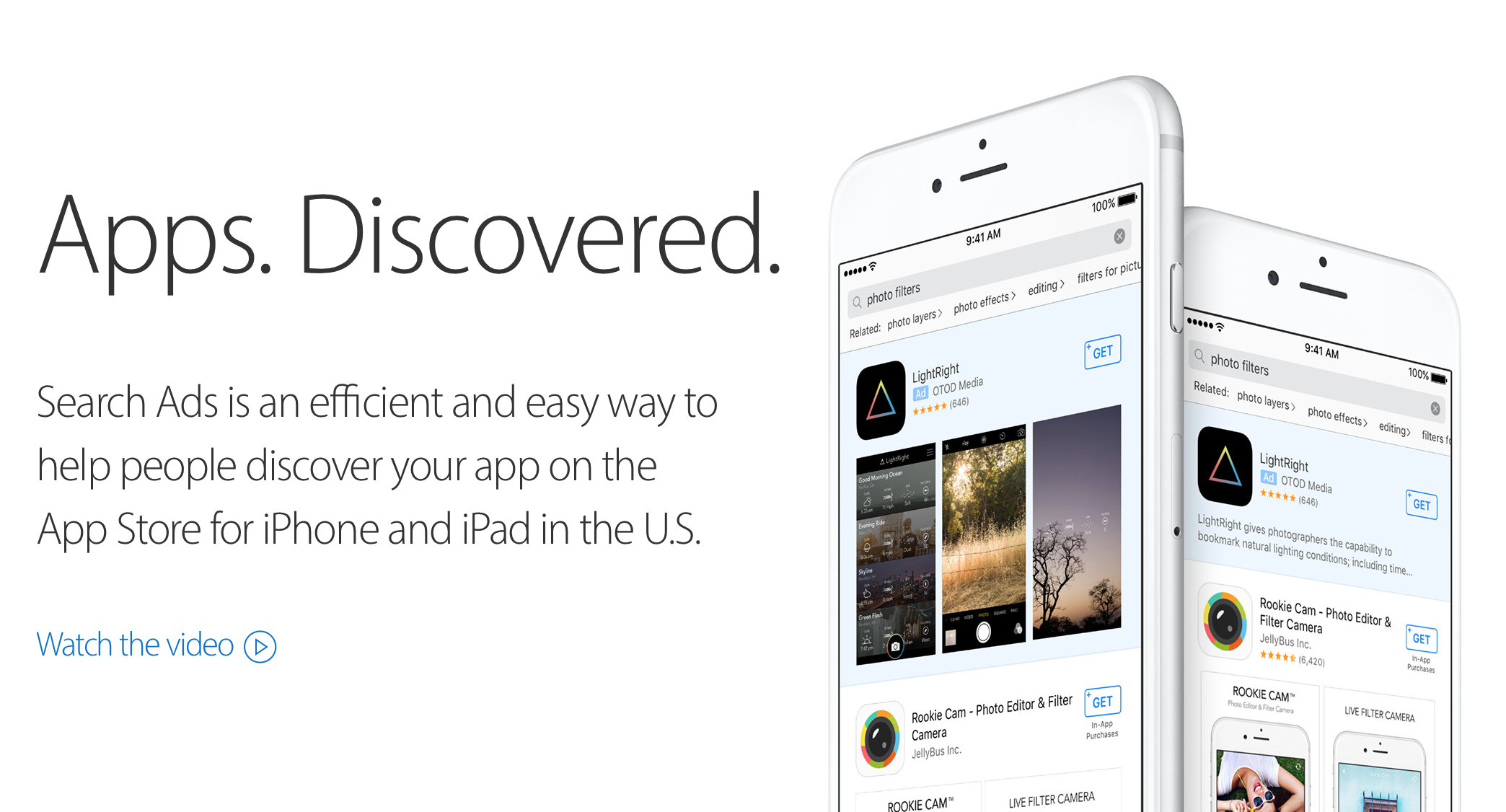 Just a few hours ago, Apple launched Search Ads. I was looking forward to them ever since they were announced shortly before this year’s WWDC. I think they will be a great way to get our apps in front of customers in the best moment – when they are actively looking for a specific app.

Since Apple has yet to send out official announcement email, it’s still very early to take out any learnings from it. I want this blog post to be a documentary of my experiments with Search Ads, and hopefully to bring something valuable to our app developer’s community.

The official website is https://searchads.apple.com. Apple currently offers $100 of advertising money for free. You will receive a promo code for that in your email after signing up for Search Ads.

To my surprise, it’s mandatory to create special account just for Search Ads, which is tied to your iTunes Connect account. After signing up, you can start creating your first campaign.

A note: Search Ads are currently only for iPhone, and only for US store-front.

First, you specify which app you want to promote. Interestingly enough, as David Conrad pointed out on Twitter: you can create campaigns even for apps you don’t own. Which might be useful for research. 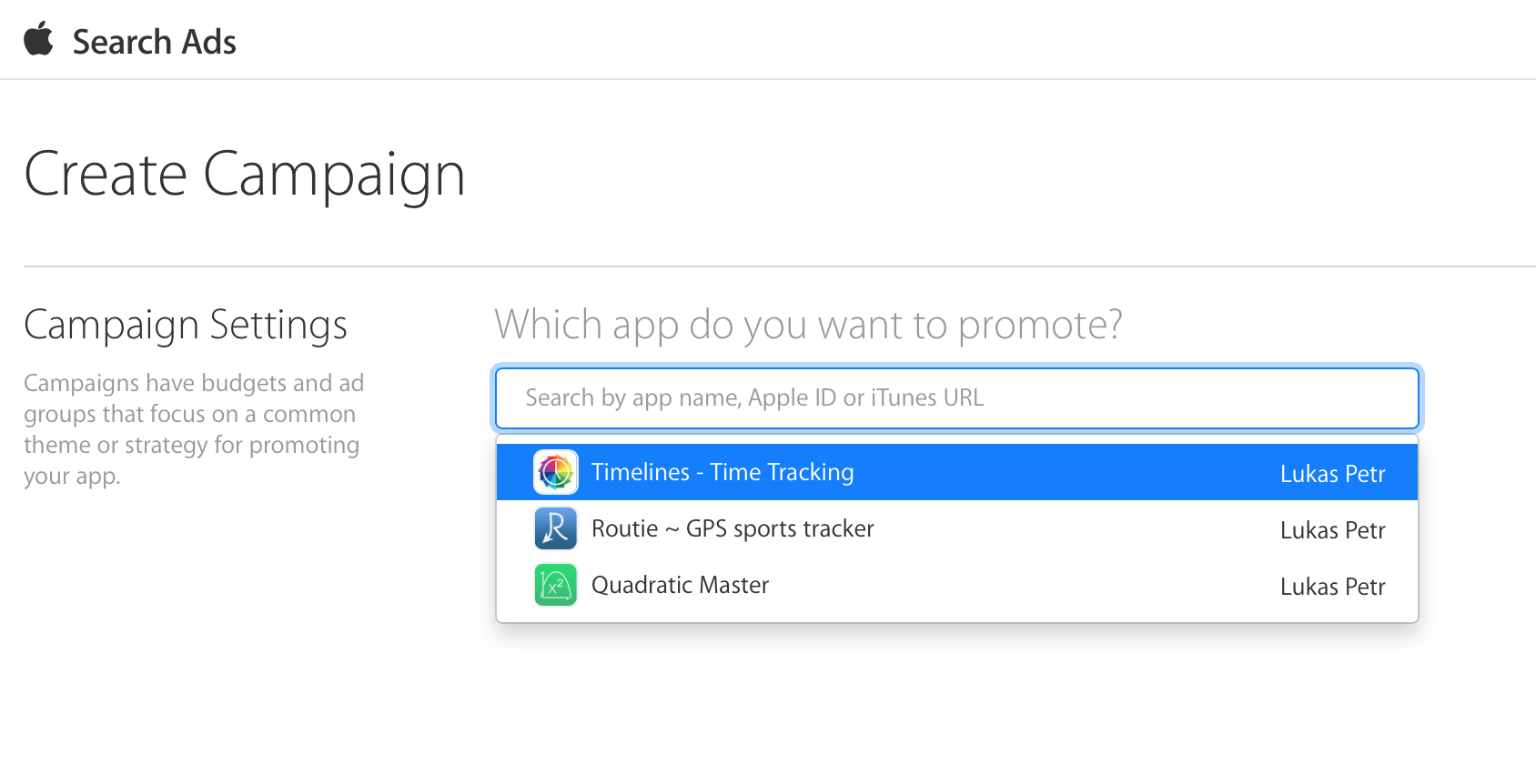 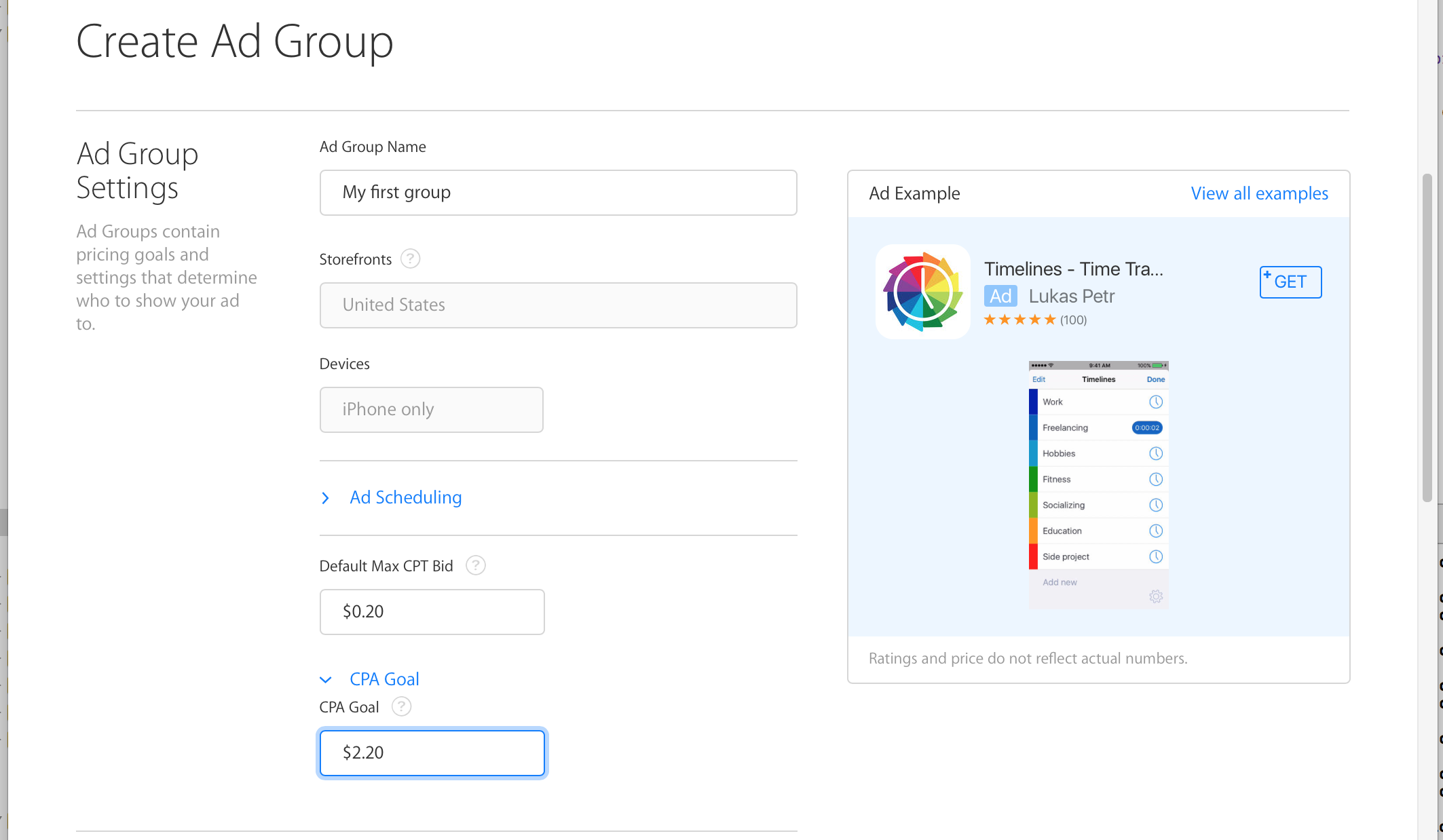 CPT and CPA settings
These are the most important numbers for your campaign. CPT means Cost Per Tap. This is essentially your bid. If you are the highest bidder for given keyword, and the Search Ads algorithm decides you are relevant enough for that keyword, your app will be shown. The important thing here is that you pay for tap on the ad, not for display of the app nor install of the app. It was shown during WWDC Session Introducing Search Ads that the reports will show you your actual costs per installation for specific keywords over time.

CPA means Cost Per Acquisition, e.g. whenever someone installs your app. The setting is called “goal” because your actual cost per acquisition will vary greatly, based on how your ad is performing for specific keywords. The Search Ads algorithm will even take it into account when deciding for which keywords to actually show your ad. Again, this is greatly explained in the WWDC Session, and I highly encourage you to watch it. 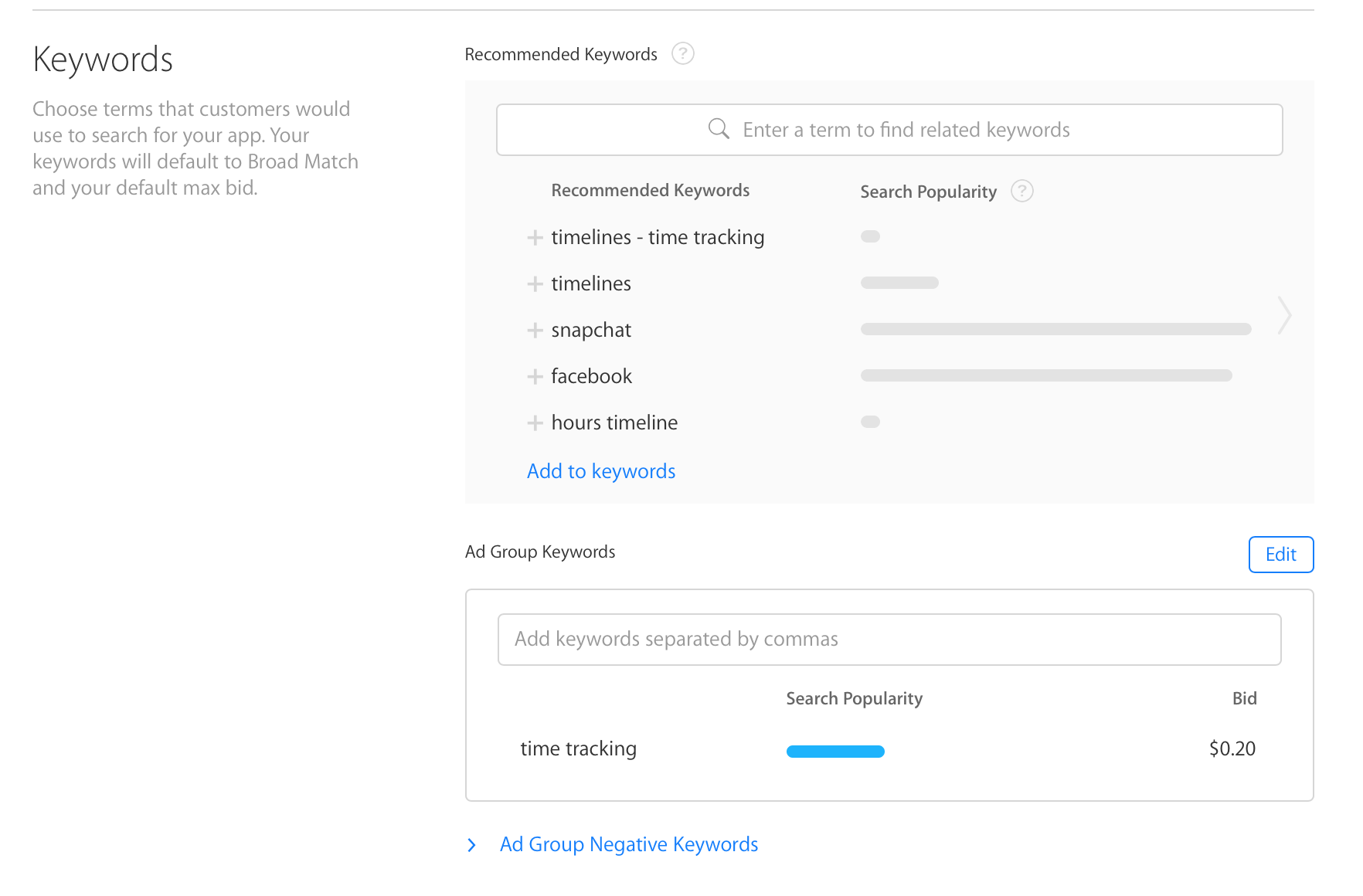 Search ads will offer you some suggestions here based on your app’s metadata and the keywords you’ve entered for it. Again, you can rely heavily on these suggestions. The interesting thing is that you can see popularity of given keywords. This will be great when deciding what keywords to target.

This is pretty much all you have to do to set up the campaign. In the next step, you have to enter Payment details (credit card). It didn’t accept mine, and I’ve seen on Twitter that several other people were struggling with that. I will update this post once it starts working.

A tip on finding the right CPT

It’s very important to set this up in such a way that you’ll decrease the chance of losing money, but at the same time have a chance of “winning” the ad display bidding. If you have no idea what is your conversion ratio between product page views and actual app installs – have no fear. App Analytics in iTunes Connect are here to help!

Here is how to get to them:
– In iTunes Connect, go to: App Analytics > [Your app] > Metrics.
– In the left pane, select Product Page Views. These can essentially be considered taps on your app.
– lower in the left pane, under “Compare to”, click on “None” and select App Units
– in the upper right corner, select Ratio.

This is what it looks like for my app, Timelines: 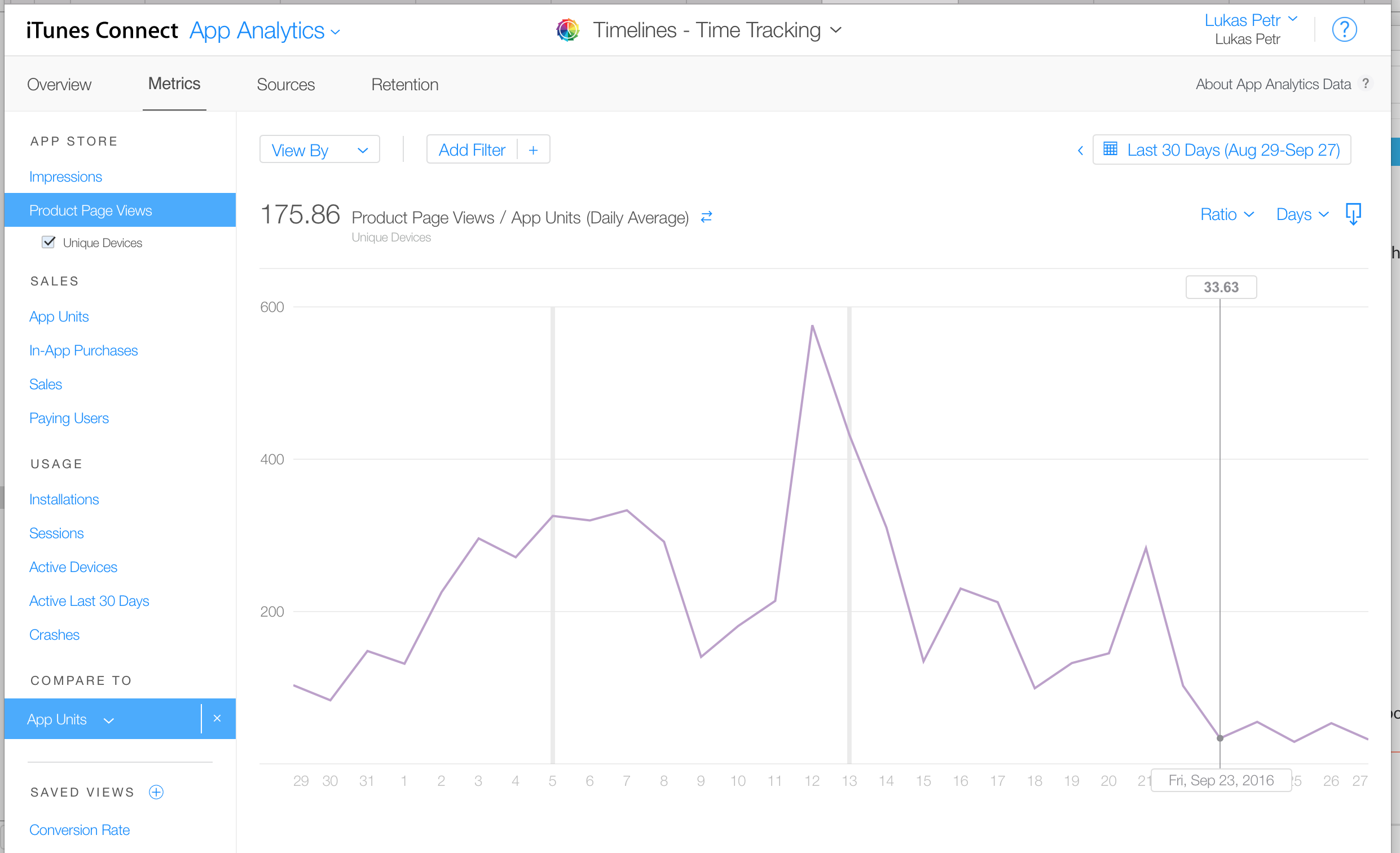 Just bear in mind that this might still be far off. Not all Product page views are created equal. If the app will exactly much what the user is looking for, I think it is more likely that he will either skip your app (because of the price), or open it and be strongly pre-dispositioned to download it. Once the Ad campaign is live, it will be important to keep close tabs on the final CPA number that Apple will calculate for you for each specific keyword, and do adjustments accordingly.

The example above is a paid up-front app. For free apps, the ratio is likely to be much better, but then you’ll have harder time tracking which of those ad-based installs translate to real transactions.

I am very excited about Search Ads, and I plan to invest into them heavily (both in terms of money and time). I will keep this post updated, and will do my best to collect all the news about it to make this a one-stop place for all the relevant resources.

Apple sent out the official announcement. Ads will go live on October 5th. 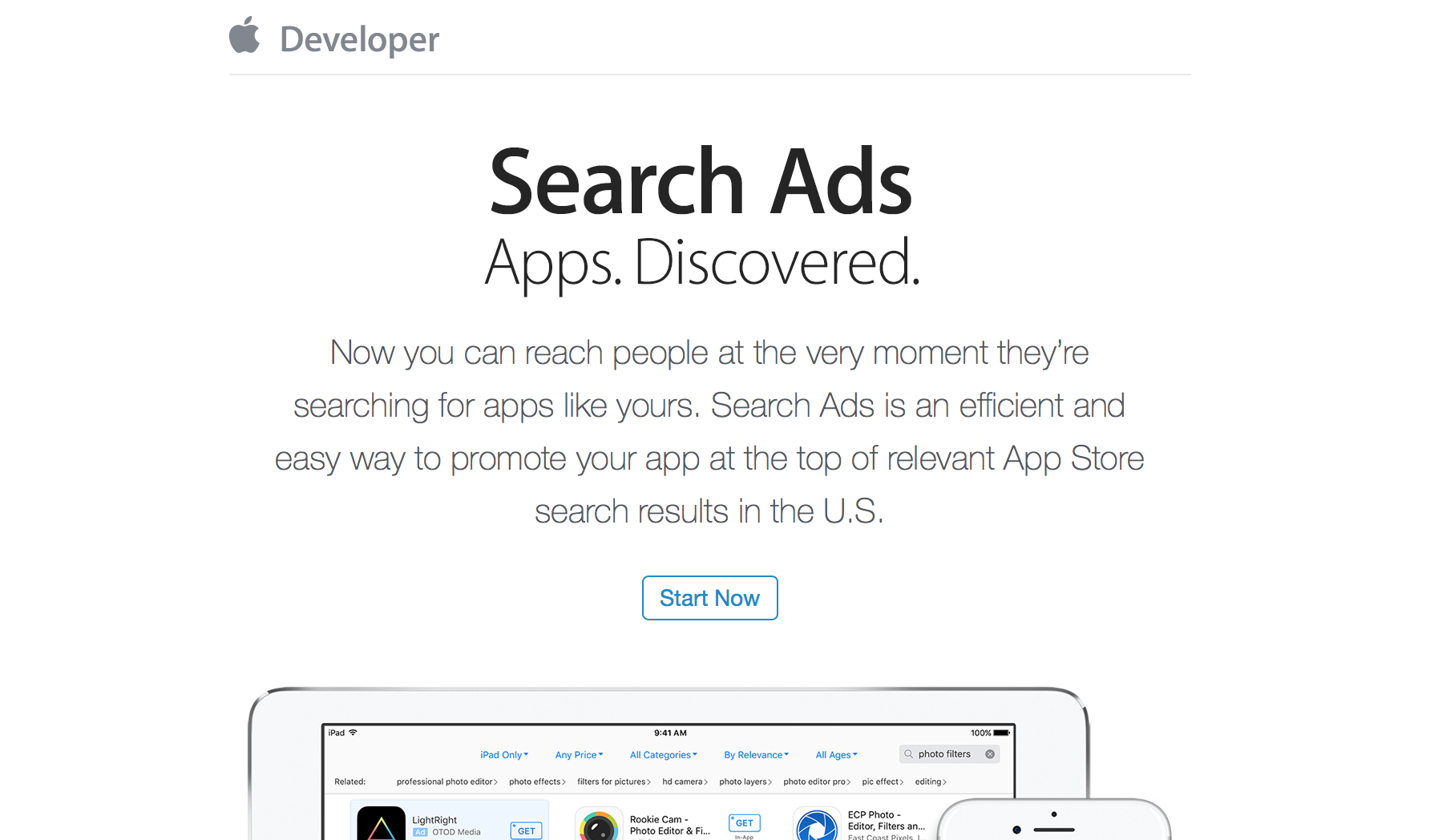 I’ve been tinkering with Search Ads some more this evening, and I have a few updates: my credit card still doesn’t work. It’s a Visa card, issued in Czech Republic. I will contact Apple about it, as this problem doesn’t seem like something that will just go away by itself.

When logged into your account, there is a tiny link in the lower right corner called Help. It links to a wealth of information about Search Ads, neatly organized into topics. I highly recommend checking it out.

There is also a backslash against Search Ads from some people on Twitter:

Also shit like this is why ads suck in the App Store. The thing I want is almost not visible. 🙁 pic.twitter.com/D8yWNRyGm0

Now, I agree with David that this is a problem. Especially for people whose apps already rank high for a specific keyword. If someone bids you out, you’ll essentially lose that acquisition stream. It will definitely be tricky. Also, I’ve been thinking about it some more, and it seems like participating in Search Ads will almost be mandatory, if you want any source of traffic from App Store Search. As more and more people will start creating Ads, it will become increasingly harder to get that prime 1st result exposure without advertising yourself. 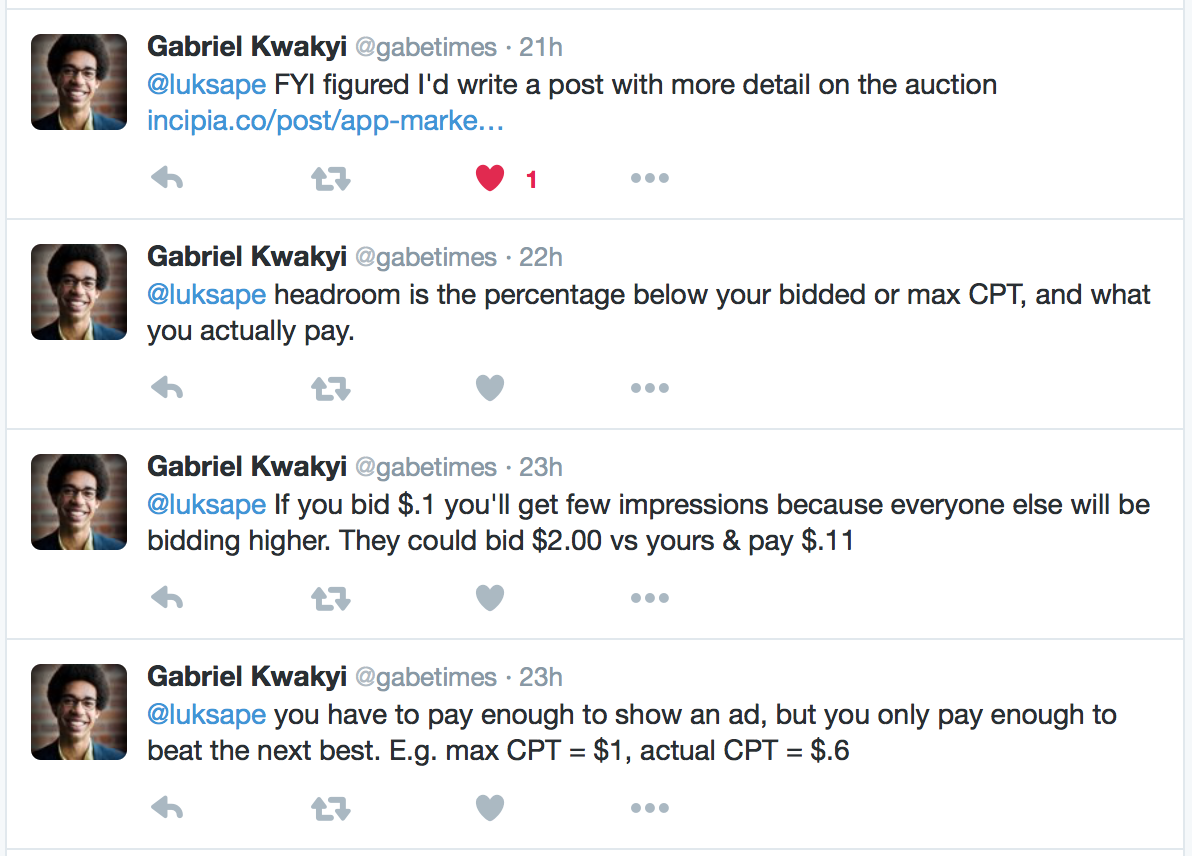 I had an interesting discussion on Twitter with Gabriel Kwakyi about impression share and some potential implications of bidding too low. He ended up writing a detailed blog post about the topic and I highly recommend checking it out: How the App Store Search Ads Auction Works.

On the topic of setting up payment details and the infamous “Error saving credit card information. Try again later.” message: I started panicking this morning that it just won’t work and I’ll be left out of Search Ads altogether just because some limitation to US-only cards. I considered asking a friend in US to set up a bank account for me there. The panic even went as far as considering flying to New York for a day or two just to set up the account there myself, in case he wouldn’t do it. But then I got a better idea: to find out what is the real difference between credit card and debit card. And it turned out that I was mistaken. The term ‘credit card’ is used so abundantly in my country that I just always assumed that’s what I have. It turned out that I actually have a debit card. So the solution should be just to set up a credit card at my bank and it ‘should’ work. I will confirm this on Monday. But I feel relieved already 😅.

I meant to write an update sooner; after all Search Ads launched a week ago. But obtaining the credit card turned out to be a major hustle. I spent almost three whole days trying to get it. Long story short, I ended up going to a different bank than where I have my personal account, and they made the card for me with no problems. And.. I received it today! Obviously, I was a bit nervous if it will get accepted in the Payments method tab, but luckily it did.

I set up three campaigns – one for each of my apps. For my main app, Timelines, it is a generic one. For Routie, I decided to go with targeting on just one keyword – kayaking. Quite a lot of Routie users are avid kayakers and I used to get decent downloads at times when Routie was first for ‘kayaking’ keyword on the US App Store. With this campaign, I hope to regain some of that. For my third app, Quadratic Master, I also set up a generic campaign. But I put the CPT and CPA limits really low, because I assume there is little to no competition. Also, since it’s a free app, my ratio of product page views to downloads is actually lower than one – probably lots of people download it even before visiting the app’s page.

We’ll see how it goes, but I am excited that I am finally up and running! I’ll make sure to update this post in the upcoming days.